As England fought valiantly for the European Cup at Wembley on Sunday evening, across the channel there was much celebration from a team of cyclists, captained by Gareth Southgate’s old teammate Geoff Thomas.

The Tour 21 – organised by Andy Cook Cycling on behalf of Cure Leukaemia – was an epic ride following the route of the 2021 Tour de France, exactly a week before the pros. 18 riders took on the challenge of this 3,500km+ route to raise their target of £1million.

Cure Leukaemia secured the right to be the Tour de France’s first official UK Charity partner in the run up to the event – helped in part by the determination of leader Geoff Thomas, who has completed the TdF route four times in the past, first riding it in 2005 soon after his own recovery from Leukaemia, an illness he contracted a year after retiring from a distinguished professional football career.

Andy Cook Cycling has worked with Geoff previously, and were invited to organise all the cycling specific aspects of this event for GT15 last year. Due to the pandemic, the 2020 version had to be cancelled, and it wasn’t until about 10 days before it began this year that the green light was given. Andy and Jacqui worked with the staff at Cure Leukaemia and their hotel booking agent to book suitable accommodation, arrange (fully vaccinated) staff and finalise travel plans for the riders and crew.

It was tough for the riders – some of whom had been waiting to do this for over a year – to know they had sponsorship in place and miles of training in their legs, but that they might not be able to complete the challenge. But they were ready and raring to go when they got the call, and there was a buzz of excitement in the air as they were collected from across the country and taken to Portsmouth on 17th June for the ferry to France. Paul Martin from European Bike Express (which you may recognise as the main coach & bike transport from RAB) did a stellar job getting the riders to the event, around the route, and home again – even organising the very hungry cyclists a free buffet meal on the ferry home!

Marshal Land Rover supplied a couple of great vehicles to support the team. In these, with all the kit (plus spare bikes supplied by Ribble), key staff travelled to Brest early to ensure everything was ready for when the riders arrived on Friday 18th June.

Ride Leaders Mark, Steve and Simon rode with Andy and the riders each day, ensuring they stuck to the route (no road closures or helpful signage for these guys!) and keeping everyone’s morale up. The job of a ride leader can often closely resemble that of a counsellor – you have to be there and tuned in to a riders’ needs as sometimes, due to fatigue, the rider doesn’t always give themselves the food, drink or rest they need. The team of leaders are some of Andy Cook Cycling’s best – experienced cyclists with a passion for getting people through difficult challenges and out the other side without too many physical, or mental, issues!

Naturally, there are physical issues when you ride over 100 miles a day for three weeks. Our sports massage therapists Stu and Rhia were on hand every day, along the route and at the hotels each night, with their magic hands ready to manipulate those muscles and help the team ride another day! They often had to be creative when setting up make-shift therapy rooms in hotels – their beds were often up-ended to make room for the more-important massage table!

On the road, Peter & Terry were chief mechanics driving the Ride Director’s car – there with mechanical and sometimes technical support on route. Andy & Angie were also on hand for mechanical support, but their main job was to provide much-needed water stops wherever and whenever possible. From windy mountain-tops, to roadsides in 40 degree heat – this pair were always a welcome sight for the riders!

The team of Andy Cook Cycling pit crew, ride leaders and massage therapists were complemented by an awesome team of caterers and laundresses – Carol and Sue kept everyone happy with delicious lunches and clean clothes.

The rest of the team was made up of the brilliant guys from Freeride – who were filming the whole event for Eurosport, NBC and The Tour 21 Diaries. You can watch all the great videos that were produced here:

Joining these videographers were photographer Joolze and her motocycle transport rdier Paul. Joolze took some absolutely amazing photos each day – you can see them in the gallery below.

A cracking team from French events company ISE completed the crew – Peggy & Julie in Lead Car checking the route, Hugues & Alex as the motorcyle outriders and André & Antione in the broom van. 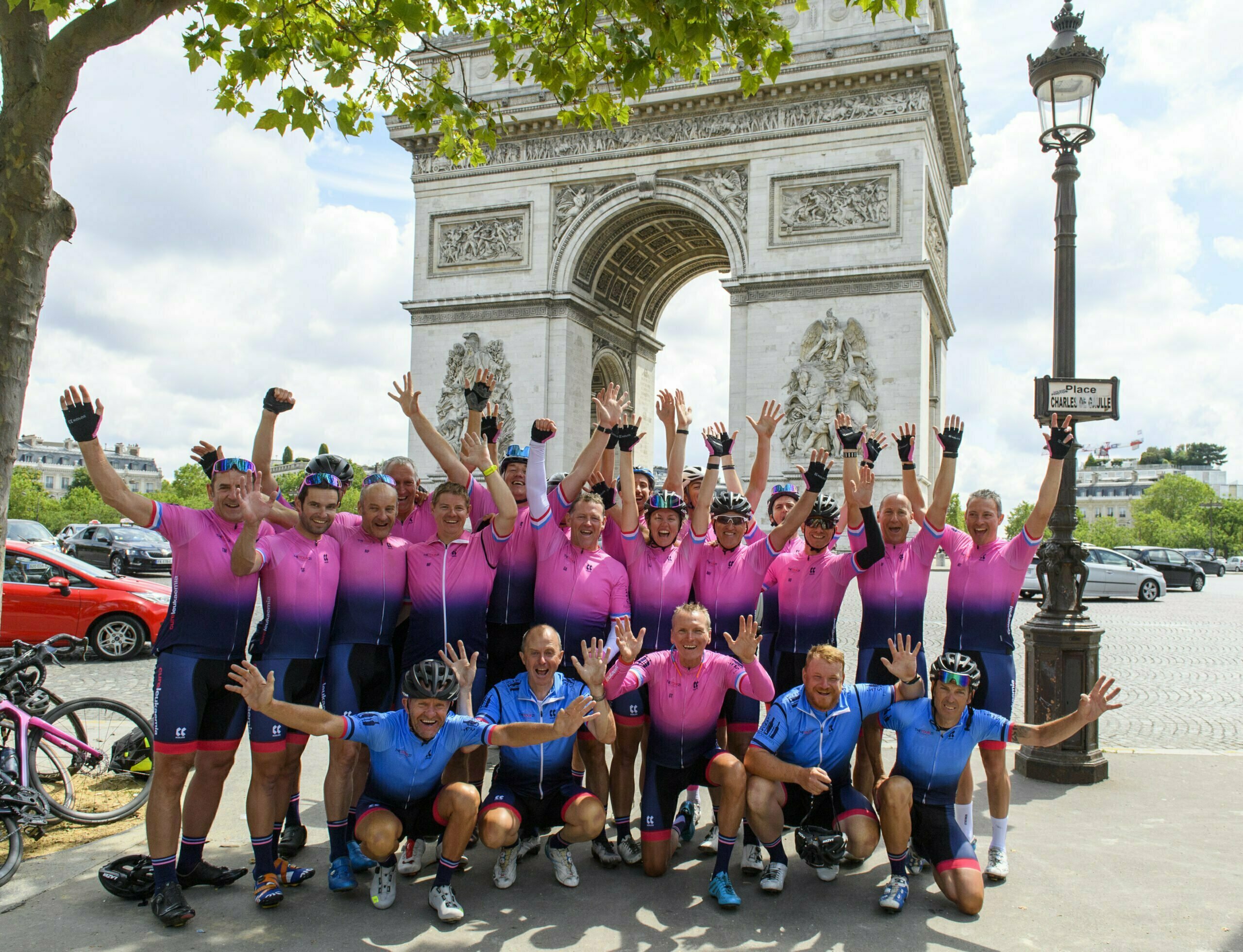 Over the course of three weeks, 21 days, with only two rest days, the amazing men and woman of the Tour21 team each:

and raised… over £1million for Cure Leukaemia!

Amongst many amazing things that happened on the Tour 21, the team were excited to receive messages of support from Gareth Southgate himself, the day of the England v Germany match, Chris Froome, in the middle of the Tour de France, and many other famous faces like Stephen Fry and Eddie Izzard!

A highlight of the post-tour celebrations was watching the video of Geoff’s chat with the one and only Geraint Thomas, with words of encouragement for the gaffer and his team with only a couple of days to go.

This celebration video sums up the whole event. Watch out for messages of congratulations from cancer survivors, Geoff’s old team managers at Chrystal Palace, and some famous faces.

Cure Leukaemia has already received 100s of enquiries about joining the event in 2022 by the end of this years event. We will be there with the team again next year, getting them through an extremely tough challenge, and raising the much needed funds for this truly great charity.